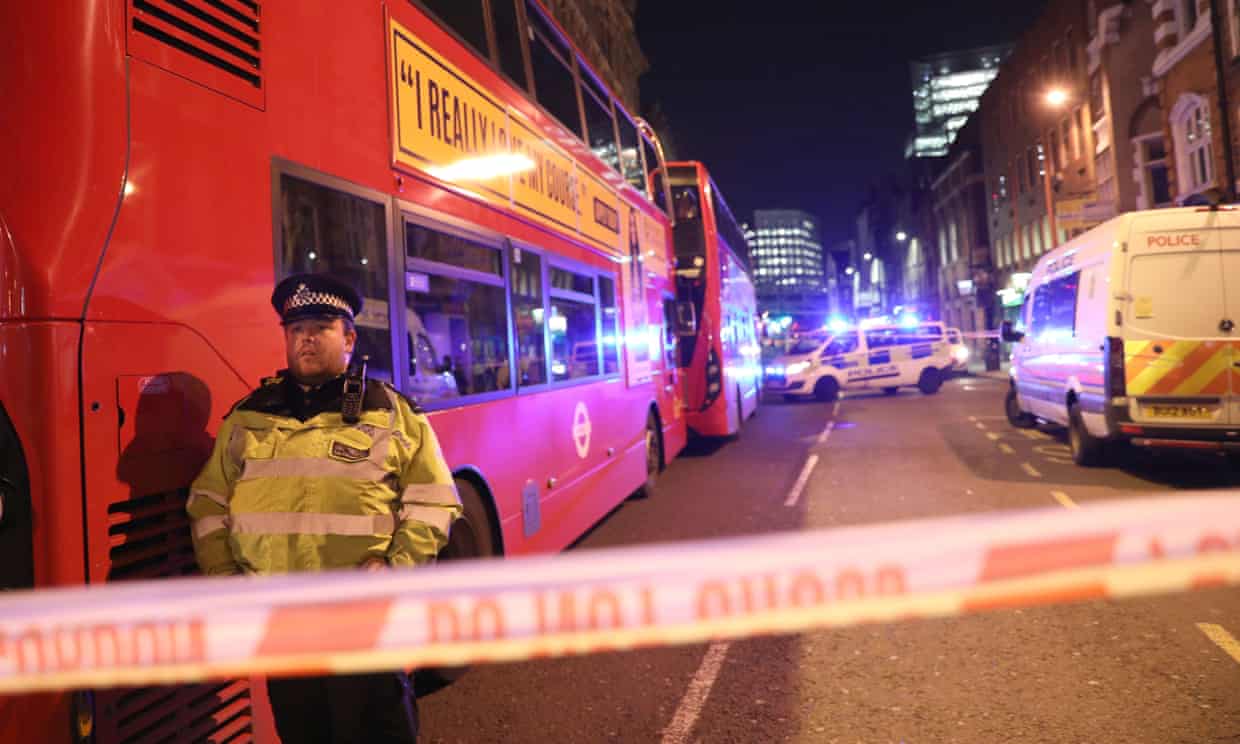 Usman Khan, the suspect shot dead in the 29 November 2019 terror attack near London Bridge, had been released from jail after being convicted of terror offences, including plotting to attack the London Stock Exchange in 2010.

Khan was part of a gang of nine extremists from Stoke-on-Trent, Cardiff and London who were sentenced in February 2012 at Woolwich crown court. He had planned to establish a “terrorist military training facility” on land owned by his family in Kashmir, according to sentencing remarks.

Khan, at 19, was the youngest of the group. In his sentencing remarks Mr Justice Wilkie said Khan and two others were “more serious jihadis” than the others.

Khan was originally classed as never to be released unless deemed no longer a threat but this condition was later lifted.

He was freed in licence in December 2018.

Wilkie said Khan and his co-accused Nazam Hussain and Mohammed Shahjahan were planning to fund and establish the terrorist training school, with Khan and Hussain planning to leave the UK in January 2011 to train.

Khan appealed against the decision in 2013 before Lord Justice Leveson, sitting with Mr Justice Mitting and Mr Justice Sweeney. It was decided that his sentence would go from 18 to 16 years, along with five-year extended licence periods.

The court of appeal judgment said: “The groups were clearly considering a range of possibilities including fundraising for the establishment of a military training madrasa in Pakistan, where they would undertake training themselves and recruit others to do likewise, sending letter bombs through the post, attacking public houses used by British racist groups, attacking a high-profile target with an explosive device and a Mumbai-style attack.”

Khan’s lawyer, Joel Bennathan, said at the time of the offence his client was 19. Notes from the appeal hearing say: “Mr Bennathan put the matter on behalf of Khan in this way. At the time of the offence, he was a 19-year-old, whose ambition was to bring sharia law to Pakistan-controlled Kashmir, his ancestral home. The madrasa had not been built (and there was no evidence that there was any real funding to build it); he had no access to terrorist training and it was highly unrealistic to suppose that the authorities in Pakistan would allow a teenager from Stoke to impose sharia law or run a training school for terrorists.”

Guardian Today: the headlines, the analysis, the debate – sent direct to you

Read more
It is also noted: “Conversation about bombing public houses in Stoke (in any event, not included within the allegation in the indictment) was no more than angry talk within some four minutes of young men responding to racist incidents in Stoke.”

In a July 2013 report the independent reviewer of terrorism wrote that Khan was one of three men from Stoke who had travelled to Pakistan’s federally administered tribal areas (Fata) and planned to fund, construct and take part in a terrorist training camp in Kashmir, with a view to carrying out terrorist acts in the future. They were part of a group that had copies of the al-Qaida English-language extremist magazine Inspire and had considered putting letter bombs in the post.

Usman Khan in a police mugshot from the time of his original arrest. Photograph: West Midlands Police/PA
The extremists talked about setting off a pipe bomb in the toilets of the London Stock Exchange, as well as in pubs in Stoke, the Woolwich court heard. A handwritten target list belonging to the group listed the names and addresses of the then London mayor, Boris Johnson, the Dean of St Paul’s Cathedral, two rabbis, the US embassy in London and the stock exchange.

Group members were bugged and heard claiming that fewer than 100,000 Jews died in the Holocaust and talking about how Hitler had been on the same side as the Muslims because he understood that “the Jews were dangerous”.

Khan’s then home in Persia Walk, Stoke-on-Trent, was bugged as he discussed plans for the firearms training camp, which was to be disguised as a legitimate madrasa, an Islamic religious school, Woolwich court heard. Discussing terrorist fundraising, he said Muslims in Britain could earn in a day what people in Kashmir, a disputed region divided between Pakistan and India, are paid in a month. He went on: “On jobseeker’s allowance we can earn that, never mind working for that.”

The sentencing judge, Wilkie, said the gang embarked on a “serious, long-term venture in terrorism” that could also have resulted in atrocities in Britain. He noted: “It was envisaged by them all that ultimately they and the other recruits may return to the UK as trained and experienced terrorists available to perform terrorist attacks in this country.”

The men were mostly British citizens apart from two born in Bangladesh. The Met said at the time that the operation to round up the gang involved 1,000 police and staff at its height.

Do NOT follow this link or you will be banned from the site!